A majority of today’s fuel cell suppliers are focussed on the development of fuel cell stacks with a peak power of up to 250 kW mainly for automotive and small aerospace applications.

For applications which require peak powers in the megawatt range alongside high power density and high efficiency, stacks in the kilowatt range power levels pose an integration challenge. A 90 seat hydrogen hybrid electric regional aircraft with a peak power demand of 7-8 MW would require more than 30 individual stacks, which increases system complexity and reduces serviceability, maintainability and reliability of the aircraft.

Initial focus will be to develop Smart Megawatt Scale (SMS) fuel cell stack systems for large aircraft applications, though the technology can also be used in a range of applications such as heavy goods vehicles (HGVs), shipping, rail, etc., offering a significant technology permeation potential which will create a meaningful benefit to the environment.

In an aerospace application, keeping aircraft as light as possible is paramount.

Whilst it is understood that batteries can provide weight saving benefits through peak power shaving alongside hydrogen fuel cell powertrains, current battery technology exhibits energy densities which are too low to achieve significant range or payload for large aircraft relying on battery only.

For instance, current battery technologies have energy densities of approximately 250 Wh/kg compared to greater than 500 Wh/kg for current generation fuel cell systems with hydrogen as a fuel (gaseous hydrogen) having a theoretical maximum energy density of 33 kWh/kg.

Hydrogen’s gravimetric energy density, three times higher than kerosene, makes it a good alternative to carbon-emitting fuels. The result is that hydrogen takes up significantly less weight onboard an aircraft compared to batteries or other alternative fuels.

With the right fuel cell technologies to convert the energy contained within hydrogen into electric propulsive power, the maximum benefit to the environment can be achieved as hydrogen in fuel cell does not produce any carbon or NOx emissions where water and heat are the only by-products. 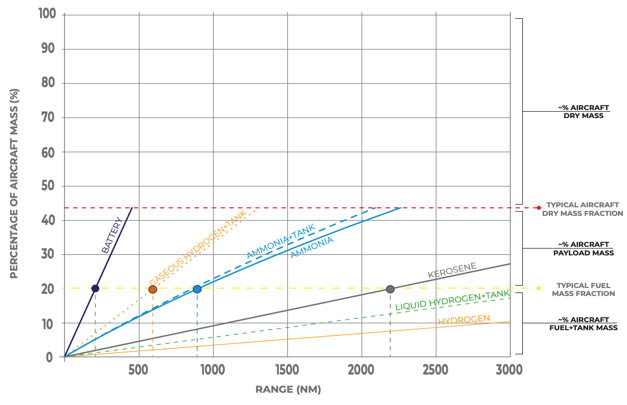 This image must not be copied, reused or reproduced without our written permission.

What is a Fuel Cell?

Proton Exchange Membrane (PEM) Fuel Cells can generate electricity by combining hydrogen fuel and oxygen from the air, with the only by-product being water. This makes it a clean technology which completely eliminates common pollutants such as CO2 and NOx.

How A Hydrogen Fuel Cell Works

A fuel cell is a device that converts energy stored in molecules into electricity through an electrochemical reaction. It is composed of an anode and a cathode separated by an electrolyte membrane. A hydrogen PEM fuel cell works in the following way: 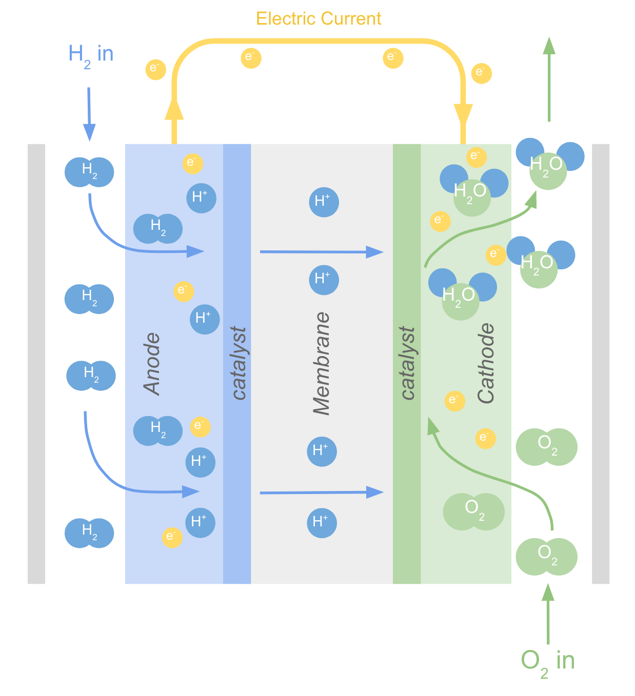 This image must not be copied, reused or reproduced without our written permission.

A functional fuel cell system consists of the stack of individual fuel cells as well as any components required for operation, known as the balance of plant. SMS Fuel Cell’s objective is to develop fuel cell systems which will exhibit:

Achieving this combination of attributes requires the entire system to be as light and compact as possible by maximising structural efficiency and utilising waste heat through smart thermal management to maximise system efficiency.

This image must not be copied, reused or reproduced without our written permission